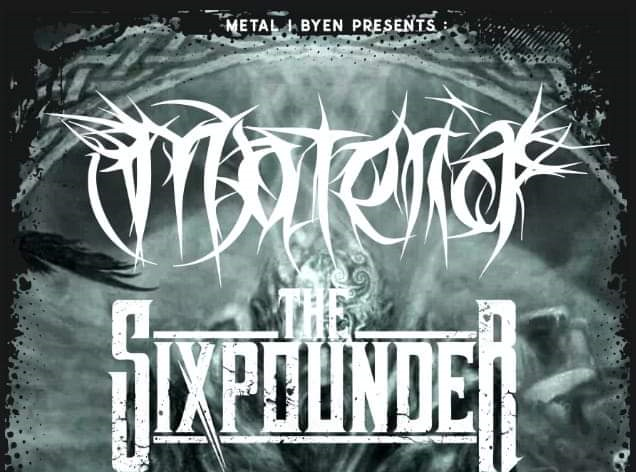 “Materia is going to be the NO. 1” Waclaw “VOGG” Kieltyka (Decapitated)

The Sixpounder beginnings date back to the year 2006 to a city called Wrocław. The guitarist Paul Shrill and vocalist Frantic Phil spent two years searching for the right people to complete the band. During this time, the majority of the songs were composed by the duo, which were later added to the debut album. In 2008, the duo formed the band with: Jar O’Big Bottom – bass, Mike “The Shredding” Noodle – guitar, and Jeff Vader – drums. With the right people on board, The Sixpounder started touring, took part in contests and band competitions, and won the most important of them – the Wacken Metal Battle. This gave the band the chance to represent Poland on the legendary festival – Wacken Open Air in 2010. For the first time then, the band shared the stage with the biggest metal stars such as Soufly, Iron Maiden, Motley Crue, Slayer, Alice Cooper and Cannibal Corpse.

In 2010, the band began recording their first album – “Going To Hell? Permission Granted”, which was selg released in 2011. Also, the same year Frantic Phil took part in the singer-oriented talent show “The Voice of Poland”. The succes achieved by the singer, has been appreciated by Universal Music Group, which soon proposed to re-release their debut album, and that made The Sixpounder the first strictly Polish metal band in the history to be released by this label.

The Sixpounder has shared stages or opened for Behemoth, Decapitated and Kat. Toured across Poland with bands such as Vader (Blitzkrieg VI) or Acid Drinkers. The band also performed directly before Motörhead at the festival Ursynalia and thanks to this opportunity – gained of fans.

In 2013, The Sixpounder began recording their second album entitled “The Sixpounder”. The album features special guests: Jacek Hiro of Sceptic, Vogg of Decapitated and Peter of Vader.

With a lot of experience gained along the way, the band decided to become independent, meaning that their second album, “The Sixpounder”, was released at their own expense on May, 2014.

In 2014, by beating almost one thousand bands, The Sixpounder won the opportunity to play at the Woodstock Festival in 2014. The band performed on the last day of the festival as the headliner on the “Fabryka Zespołów” stage in front of a few thousand people. This concert by many reviewers have gained a reputation as one of the best at the festival.

The band continues to support greatest names in the industry and in the 2015 the band shared the stage with Skindred, Guano Apes and opened for At The Gates and Suicide Silence.

In August of 2015 the band started recording their third studio album „True To Yourself” in Custom 34, while the mixing and mastering is taken
care of by Daniel Bergstrand, the man known for sounds of Dimmu Borgir, Behemoth, Meshuggah czy In Flames.
The first singlefrom the third album was released in February 2016, titled „True To Yourself”.
The album is to be released in March 2016 also by Universal Music Poland.